Christ the King College in Newport, Isle of Wight, UK, was built in 2008 and extended using built-off-site modular construction in 2013/2014.

Christ the King College in Newport, Isle of Wight, UK, was built in 2008 and extended using built-off-site modular construction in 2013/2014.

After a trial of MicroLouvre screens in 2013, a significant improvement with heat gain and glare was proven and in 2014 MicroLouvre screens were installed providing pupils with a cool, shaded, glare free study environment throughout the classrooms, with localised hotspots near windows eliminated.

Valuable natural ventilation was possible due to the 80% open area provided by the screens, when the air conditioning was not in use. (Latest tests by LBNL in California have proved that air conditioning equipment can be switched off for 68% of the time, even in spring, if MicroLouvre screens are fitted).

When windows were opened, the pupils were protected from flies and other insects by the paper-thin louvres.

Although the screens have taken heavy punishment from footballs and other typical school projectiles, the classroom windows have remained protected and intact.

This is an essential Health & Safety benefit for pupils protected from flying glass. Also, because the screens have stopped breakages, valuable classroom time has been saved.

Request a sample of MicroLouvre™ and see the benefits for yourself 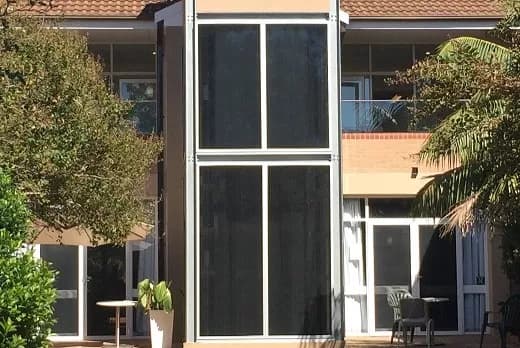 A huge range of exceptional performance properties in just one system

MicroLouvre™ metal fabric has exceptional performance properties. Its solar shading and glare control capabilities, combined with its fire and heat resistance, make it uniquely versatile. Its flexibility also means we can produce this in limitless shapes, sizes, and colours for all types of window coverings, lighting design, exhibition displays and for managing natural ventilation.